Last year we hatched a lot of Guineas the hard way. We were using a borrowed incubator and then moving the chicks in to some large plastic tubs with heat lamps and then moving them in to an old bath tub we had left over after the builders ruined it while trying to install it. 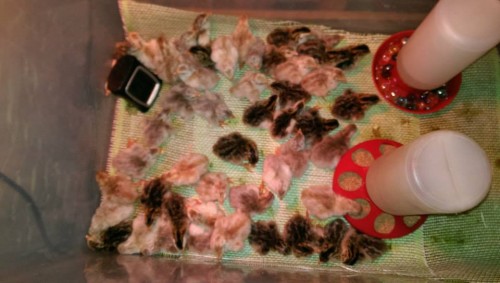 Guineas in a plastic bin

I had told Diane that I would build her a new hatchery this year so that things were easier for her to manage.

I started the new rolling hatchery with our GQF Incubator. Since this was the place where the eggs are hatched I needed to make sure that there is a stable platform for the incubator and that it was close to power. Then I decided that we needed 2 full levels for the chicks to warm and grow up. What I ended up with is this rolling condo designed for birds of all kinds and sizes.

The hatchery is 6 feet long, 3 feet deep and 4 and a half feet tall. The bottom shelf is for storage of all the egg trays, feeders and random supplies needed to hatch the babies. The second shelf is designed to hold the incubator and the tall bird cage. The third shelf is not quite as tall and is closer to the lights for the recently hatched babies.

We then wrapped the entire thing in small square wire fence and added doors to the front. As an add-on after we started hatching babies I created some dividers to split the 2 main shelves in half to further divide the babies as they hatch. 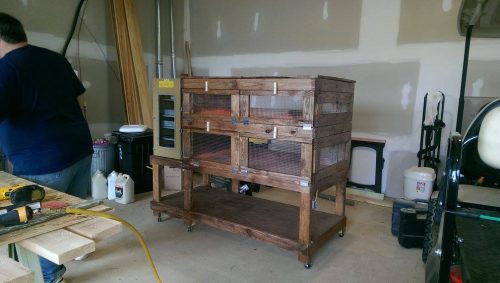 The top is wire mesh as well so that when we mount the lights up above the hatchery the chicks get some good direct heat.

Some additional features include using flex seal on the shelves to help protect them from the water and bird poop. I wired the unit with a switch and outlet on each end and an extension cord coming out the back so that we can wheel it to any outlet and just plug it in for heat the heat lamps and the incubator.

Also, I plan on learning to make cabinets this year so we purchased an Kreg Jig and built this like you would a cabinet with hidden screws and glued joints everywhere.

the hatchery turned out to be very solid and works fantastic for guineas. But it’s not ideal for ducks, mostly because ducks make a staggering mess. Next spring I’ll build a second rolling cabinet with a sunken pool that can be drained without opening the hutch. This will let us put the duck in a better location with more water than where we have the guineas.

If there is interest I’ll draw up the plans with the improvements we have made since we built this and post them here. Just mention it in the comments below and I’ll try to put something together for you. All done, minus the incubator and the tools, I think that we have about $250 in material in the hatchery. A lot of that is the flax seal (that stuff is expensive). We used #3 pine (really cheap wood) for most of the construction to keep the cost down, but 3 sheets of 3/4″ plywood and the flex seal account for more than half of the cost.