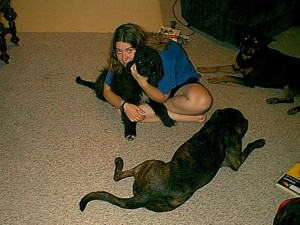 On Halloween about twelve and a half years ago one of the greatest dogs ever entered our lives. Valyn was a cross between a Newfoundland and a Great Pyrenees and instantly took over a large part of our hearts and home. As a puppy he was the clumsiest dog in the world, but he had such heart and spirit it was hard to do anything other to appreciate the efforts he made.

As he grew up he became the calming force around the house. No matter what other animals came and went over the years, he was the one clam spot in our hectic lives and he did his best to keep all the other critters calm as well.

When he was about 2 or 3 years old he started collecting cats. Not in the pick them up and shake them way, but in the I’m going to hold you down with my big paw until you relax and lay here by me of your own free will. It was amazing to see our cats, and even neighborhood strays come to regard his as the ‘safe zone’. It didn’t seem to matter what was chasing them, the cats always made a run right for Valyn and laid next to him for protection and warmth. 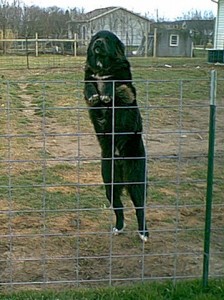 His only bad pet experience came one year when the goats Michelle had for 4H were out testing each others skulls by head butting each other. In a fit of curiosity Valyn went out to play and was promptly knocked nearly unconscious. From that day on he enjoyed the company of the goats through the safety of the fence.

As Valyn got older he got like many of us and stopped chasing things so much and spent more time on the porch just letting his voice be heard. He never really seemed to bark at anything in particular, he just liked the sound of his own voice. And it was a loud voice. In his last year with us he made the trip to Tennessee with us every time. Getting in and out of the truck became harder and harder, but he seemed to really love the hours spent together just driving. He enjoyed the rides in the car or truck that in the end the only thing that had made him happy in days was a ride in the car. Even if it was his last ride.

About 2 months ago our vet confirmed what we suspected. Our nearly 13 year old gentle giant had bone cancer. The only treatment would have been to take his leg and hope that he could learn to adapt at his age to life with only three legs. And even that wasn’t going to buy him a lot of time. So we did what we though was best, got him some great pain meds and spent the last two months spending as much time as possible with him and being happy to have him in our lives just a little longer. That time came to an end at 3:47pm on March 12th, 2012. He went peacefully surrounded by the people that loved him and he loved.

Valyn Making Sure That Pillow Doesn’t Cause Trouble

Letting a beloved pet go is one of the hardest things we can do. But in the end we know that he is now free of pain and happy all the time and waiting for us to join him at some time in the future. I know he is back to his old puppy form and playing with his best bud Jaba. I just hope he doesn’t mind if we make him wait a little while before we join him.