We Have A Pond 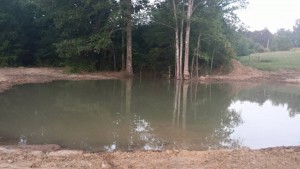 The pond is full

Like everything else we do around here, there always seems to be some sort of drama in every project. This project was no different. We had made arrangements with a dirt mover in early March to have him come dig our pond. After a lot of rain and many delays, we got a call in early JUNE saying that he wouldn’t be able to dig our pond. That’s right, after roughly 4 months of delays he called and simply said, sorry, can’t do the work I said I would do. Ever.

So now we are in the middle of summer looking for a dirt mover. Fortunately we were referred to Brent Hall and 2 weeks later he was here and digging the second week of July. The pond is designed to be a starter pond. The intention is to raise minnows, crayfish, red ears and many some catfish or small mouth bass. Most ponds are built around blue gills and large mouth bass, but I like to walk a different path so this is the route we will be going next spring. First, we need a hole full of water.

We have a spring that runs year round so we have a great water source to start with. The plan is to start with a 1/4 acre +/- pond, let it stabilize, add the fish and get it growing. then, maybe in a year or two we can start expanding the pound upstream a little at a time. My guess is that we can safely get as large as 2 acres without actually putting the spring in the pond. That’s important because we don’t want to have the water pressure from the pond shut off the spring.

With the potential for a larger pond being considered we had the levee built WAY over sized to handle any additional water pressure from a pond as much as 8x larger than the one we start with. This mean a super deep core and a very wide top. The levee is wide enough on top that you can drive 2 tractors across it side by side with room left over.

Once the core was ready we began digging out the pond. It is between 10 and 11 feet deep at the deepest point and then roughly 3 to 4 feet where it is back filling up the old creek channel. We went with a reasonable slope around most of the pond but left some flats that are 3 feet or so under water for future spawning beds.

Of course, once the pond was dug the rains that had kept us from starting all spring and summer stopped. We did get one very small rain while the pond was filling, but the spring was able to fill the pond almost all by itself in just 10 days. I’m guessing at this point that the spring is feeding the at roughly 1/2 to 1/3 gallon of water per minute. When we get rain and the runoff is added to it we’ve seen it as high as 5+ gallons per minute. So the large spillway is going to be important when the rains come again.

Now that the pond is full I’m just waiting on my “fish guy” to bring us our starter load of minnows, shrimp, crayfish and tadpoles. But, of course, he is in the middle of building a new fish farm so we get to wait again. Maybe I’ll try to catch some of those creek chubs downstream and move them up to the pond. they’ll love it.

The core is deep

The pond half full

The pond is full